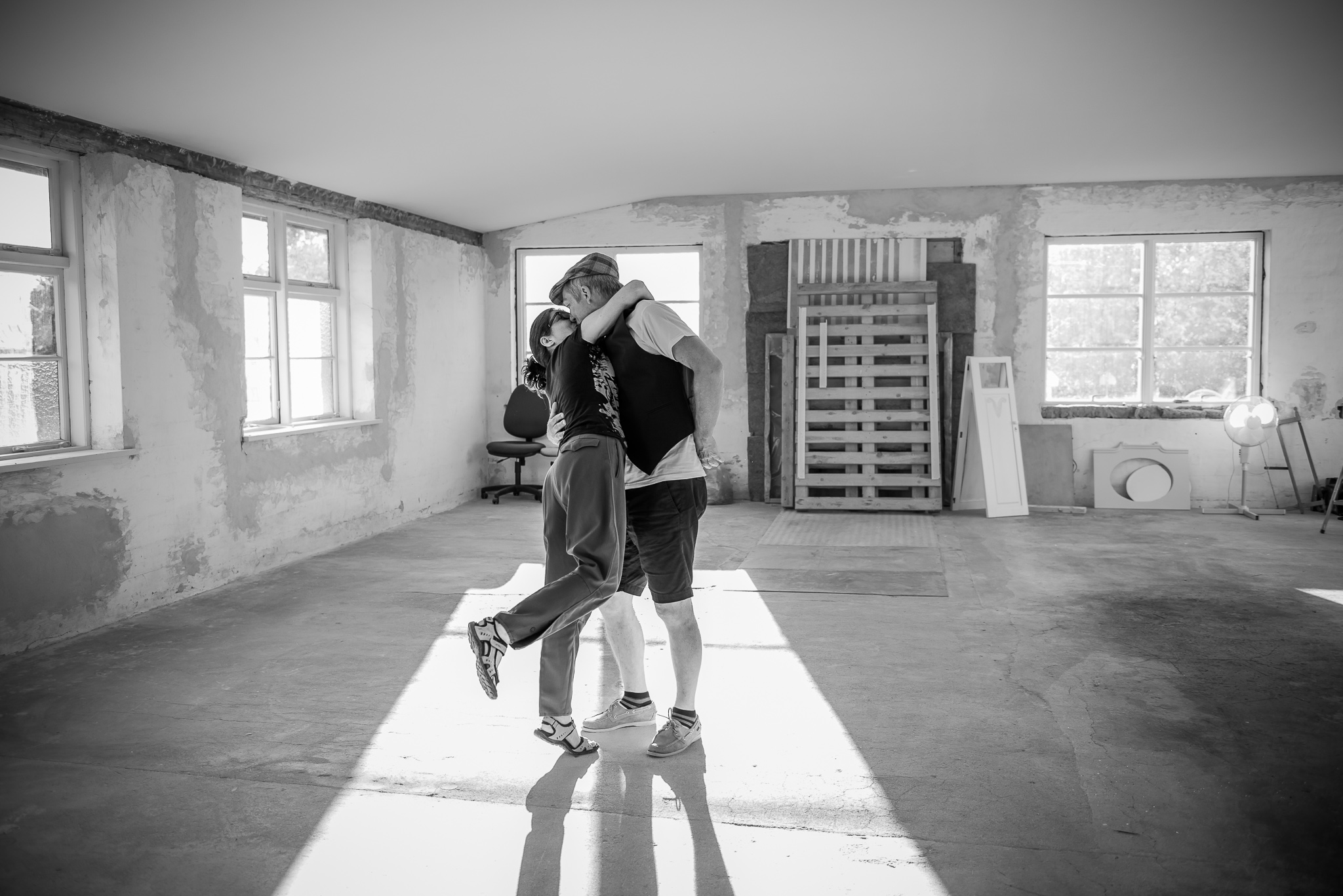 Soheila.dk: When I look at things, I don’t see things, I see possibilities!

The cycling route from Odense to Åsum goes all along the river, through a magical forest. Any fear and worry suddenly disappear as I go deeper and deeper into the tunnel made by the branches of the trees embracing above me. Birds are singing, the water plants bigger than me at this point of the year, are eating from the nature trail. I keep going on and on, trying to avoid them as well as the lazy snails cutting my way. Small insects bump into my forehead making me smile. I feel anything can happen. I keep biking until the path comes up to an end and throws me back to reality, on a road with cars leaving Odense and entering the romantic Åsum. Fortunately, this is only temporary, because I turn right I go about 200 meters and I enter in another fantastic world. It’s Soheila’s Cafe Butik, a small space of dreams, plans and imagination between the walls of a former tomato factory. It just stands there with a ”Coffe to go” sign near the road. But it is wrong, the sign should have said: ”Inspiration, optimism, hope and energy to go!”. And you might want to order a ”coffee to stay” like I did. 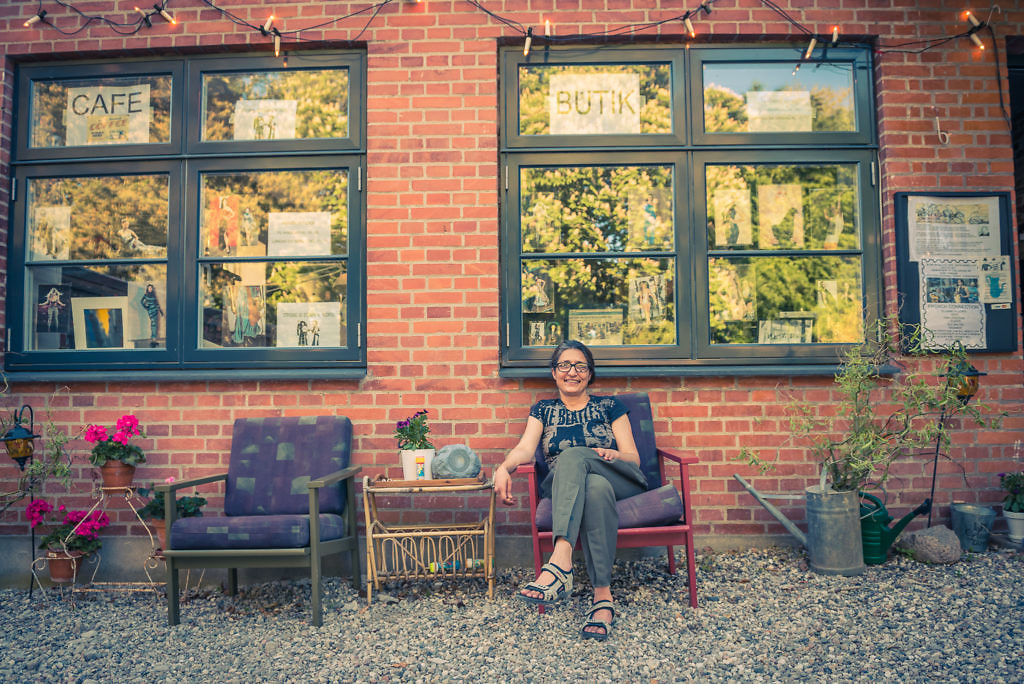 She smiles and begins talking about her family.

I have two sisters who live in Hamburg. They are both artists, one makes puppets, paints and does body painting, the other is singing. And also an older brother – he works in constructions and he is very creative when doing things for the home. And a little brother who lives in Columbia, but travels a lot. He studied electronic engineering but it was not him. He is an artist, too, he plays drums and guitar, speaks 6 languages.

When I was a child, I was the one who arranged things in the house, chose the colors for the walls and they trusted me, I don’t know why. And then, my mom made clothes. I always gave her ideas: ”Mom, can you make a top like this, and like this” but I didn’t know I could do it, too.

When and how did you find out you could?

My son was 8 months old and we had to go to a party. I went to buy clothes for him and they were so expensive. So I looked at them and I said: ”I can make these clothes!”, although I didn’t know to sew, I had never tried. I remember there was this sewing machine shop in Skanderborg and I went and I bought the most expensive sewing machine. And the seller asked me: ”So, you make a lot of clothes?” I said: ”No, I don’t even know how to do it!”. ”And why are you buying this, then?”

I said: ”Because I know I can make it. I don’t want to buy a stupid sewing machine I cannot use it later”. I bought the sewing machine, the pattern, the fabric I went home and made very nice clothes for my boy. 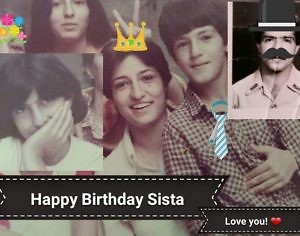 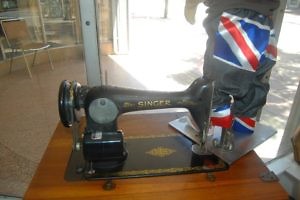 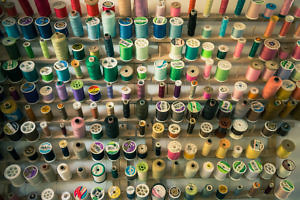 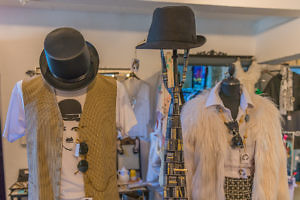 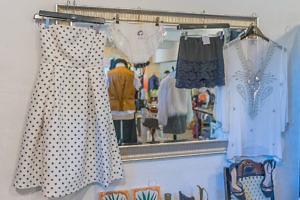 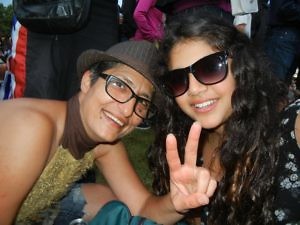 And then what? What happened after you found out you could make this?

A few years later, I started to go to Odense Fagskole, a vocational school where you could study different crafts. I went to classes where they taught you how to sketch and when they introduced new subjects I chose Ideo design. I continued with a 4 years education in industrial design and then I started my internship in a company in Hamburg for 2 months. And the owner loved my work, he said: ”Don’t finish your education, just stay here and work”. But I knew I had to finish it, this was the right thing to do. So, from Monday to Friday, I went to school, Friday evening I took a train to Hamburg, worked there Saturday and Sunday and then came back to Odense. The day I finished my education, I got a job there, he hired me. So we moved to Hamburg and I worked there for 2 years. And then I got tired: I was doing the same thing every day.

Bored. I tried to convince them to make some new designs, but they didn’t want to. So I left and came back to Denmark and tried to get a job here. But all the jobs I wanted were in Copenhagen or Arhus, and I didn’t really want them. I said to myself: I have to move, I want to move to another city, country, continent. So I made a decision: New York. Everybody was against it, everybody said that I was crazy, but I said I had to go. In September 2001, I moved to New York together with my two kids. 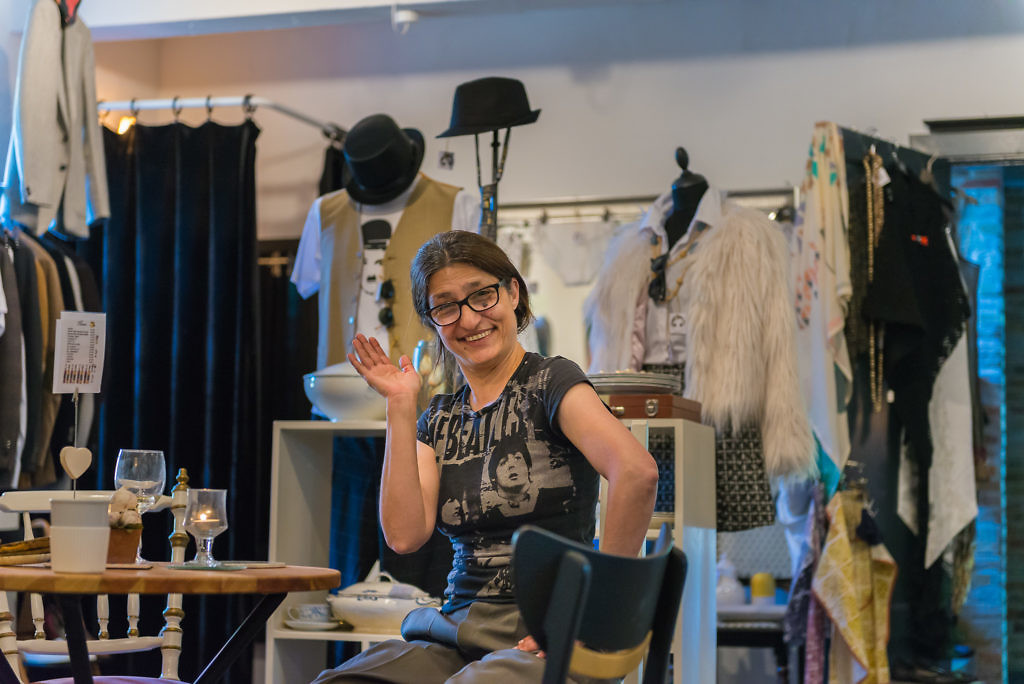 I found a job in the first week. I was a boutique on 7th Avenue and I started as a sales person. My salary was 6,25 dollars/hour, I will alway remember. It was ok. After two months, I became the manager. I learned fast, my salary went to 8 dollars/ hour. Due to my job, I met a lot of interesting people. One day, a lady from Macy’s came into the boutique to buy shoes. I sold the shoes to her and she said to me: ”You know what, you have to come and work for us!”. She was working at the HR department at Macy’s. So I went and I started to work at Macy’s for designer’s shoes. And, again I meet more interesting people who became my friends and changed my life. For example, the floor manager asked me to fix his apartment, to change it. So I went there, painted it and designed it. He loved it. So this became my weekend job – designing apartments.

Soheila he teamed up with an artist friend who was painting expensive apartments in Soho and became the personal shopper for different people who did not have the time to go shopping. Doors opened for her, one by one. Several months after her friend, the Manager of the Macy’s moved to Saks Fifth Avenue, he asked her to come and work there. She went to the interview and she became handbag product designer for Prada, Gucci, Louis Vuitton, Max Mara and all big brands. It was a lot of action in New York and she gets tired. In 2006, she moved to California, San Diego and started working for small boutiques once again.

You didn’t mind to work again for small shops?

No, because I see people as people. I don’t care how much money they have, as long as they are nice and respectful. And then in 2007, I opened my own business. Enough was enough, I have enough experience, and knew I was just going to do it for myself. 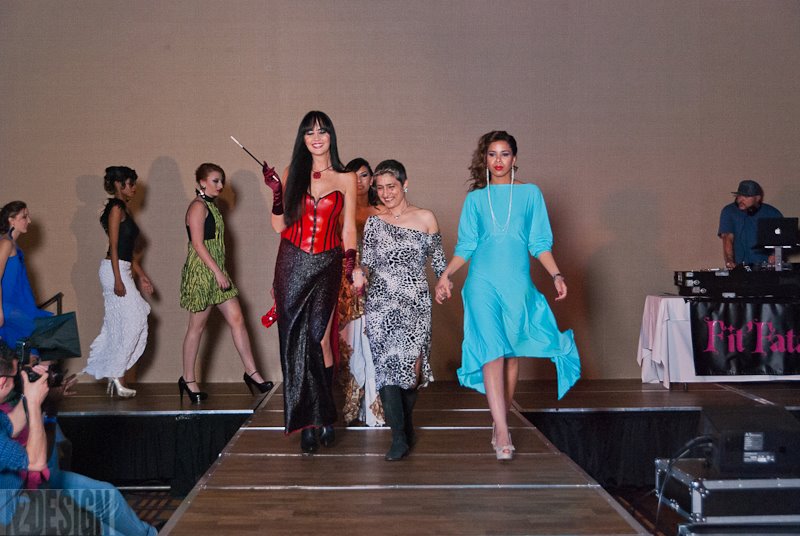 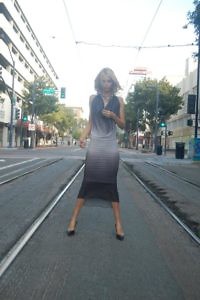 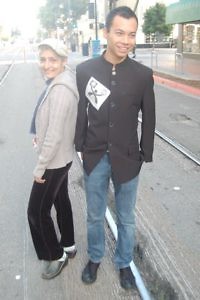 The first year was very hard. But then, all of the sudden, people started to come to my store. All my clients became my friends. I started to do fashion shows, with music and art, an interesting mixture and experience. I met a lot of people who helped me with the music, with photography. Everything it was wonderful until 2013 when my dad got sick and I had to go back to Hamburg. I decided to stay, he didn’t have too much time and he needed me. And that was the moment I met Allen again. 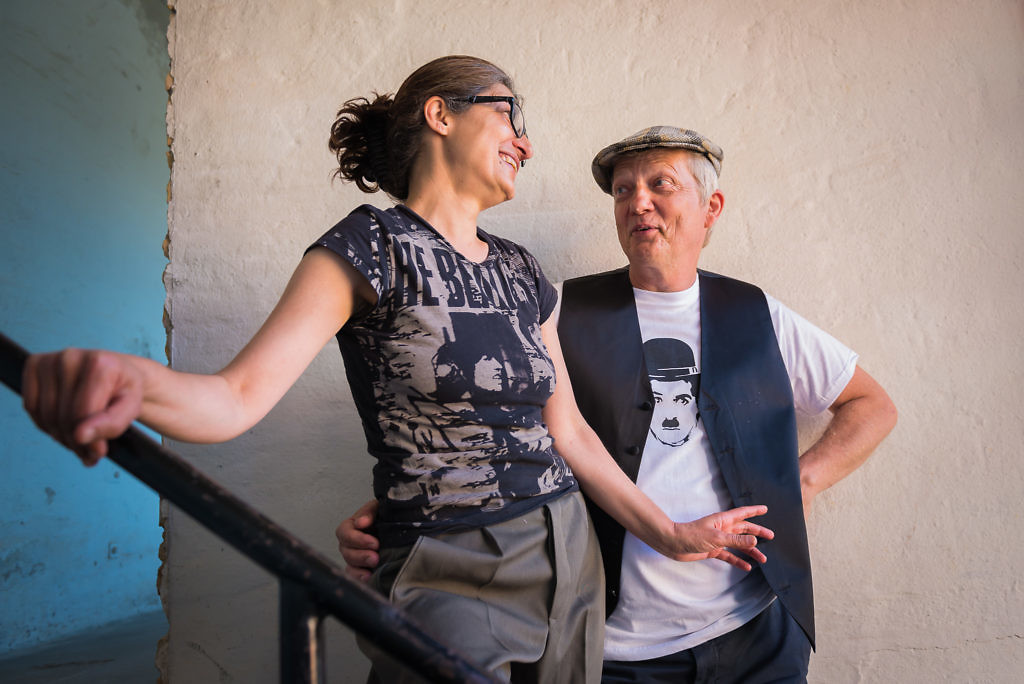 Tell me about you and Allen.

We knew each other for a very long time, as friends. My daughter and his daughter were colleagues in the 2nd grade. When I decided to move to New York, I sold some of my stuff and he bought my computer. He already liked me, I could feel it, but he didn’t say anything. And then several years later I got a phone call from Allen who was coming to New York and wanted to know if he can visit me. And we went to a nice dinner downtown, he didn’t say anything. But I could feel it. We kept in touch, e-mailing, talking, things like that. And a year later, Allen called me again to tell me that he is coming with his daughter to visit me. And he stayed for two weeks, and I knew he liked me, but he didn’t say anything. He left for Denmark. And then in 2013, I told him that I am in Hamburg, and I will come to Denmark, too. He was very happy, we met. And he said: ”You know what, I have to tell you. I love you, I don’t know what you wanna do, but I hope you are going to stay!”. And I said: “Allen, actually I want to stay!”. That was it. From that moment we are together.

Meanwhile, they started talking and planning to open a butik in Åsum.  They still had to go to the USA for several months, for Soheila to obtain her citizenship. Allen worked as a teacher (teaching Danish and History in Minnesota) and then when they are finally done, they came back to Odense, in October 2015. They contacted the owner of a former tomato factory and told him they wanted o open there a cafe-butik. They invited him to their house, so he could have a feeling of what she wanted to do. Two days later, he called them to tell he wanted to do it and started to renovate the factory. 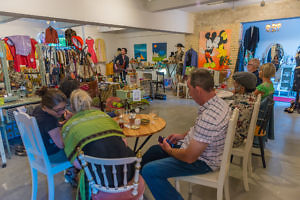 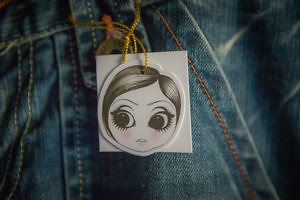 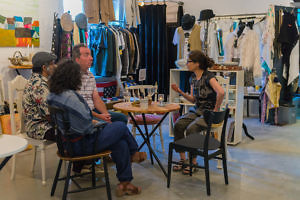 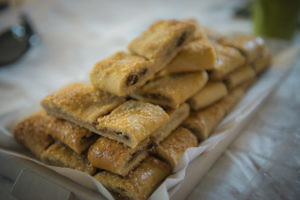 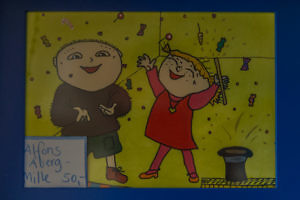 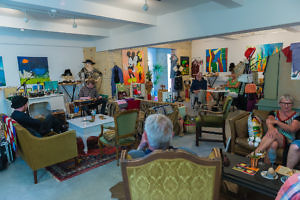 Soheila: I have a lot of ideas and big plans. Exhibitions of different artists, not only paintings. It can be anything – stones, for example. For me, everything you do is art. And I want to combine fashion shows, with music, with live interactions. I want to offer a space for artists to come here and sing, paint, and do whatever. The idea is to bring people together, to talk with each other, to make new friends, to enjoy life.

She takes me to the butik to show me parts of a broken wardrobe that were refurbished used and used like decorations in different places. We take a walk and I find out the story of each piece of furniture, each dress she has made, of all. 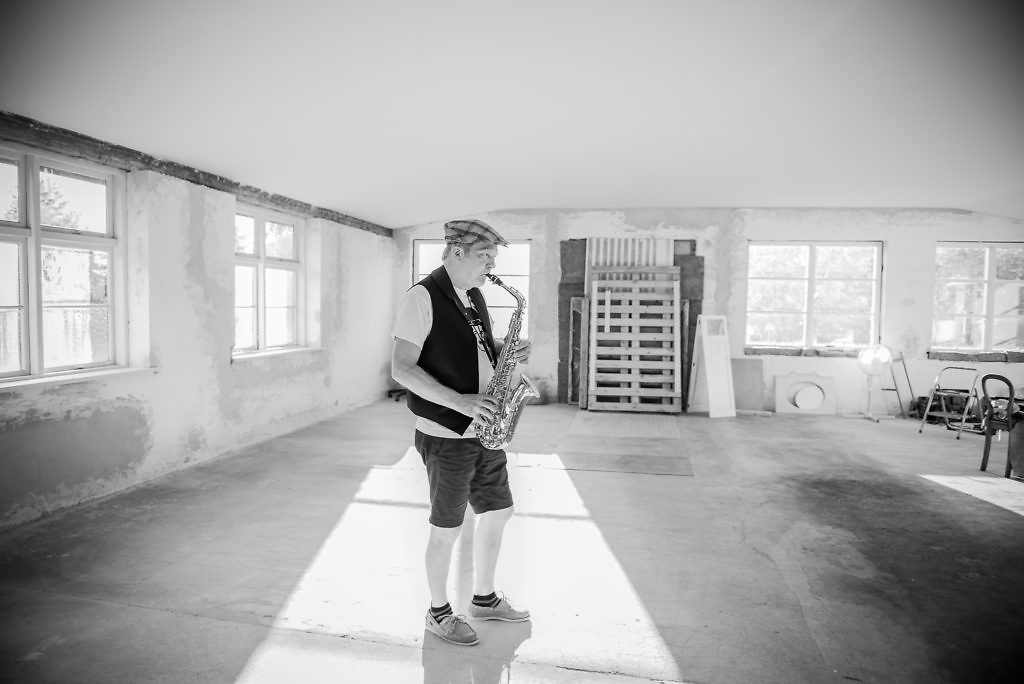 Soheila: I see things, but not what they are, but what they can become. I see possibilities. I don’t just see one object, I see the whole picture. I never see the little one, I see the big one. I don’t care about the details, I care about what you can make with that. And yes, I don’t live in reality, I hate reality. Because the reality is only about problems and obstacles, and people who say – you can not do this, it’s not possible.

Allen joins us and we go upstairs the butik to a generous, bright space. Here is where he plays the saxophone and meets with others to take lessons from a music teacher. Where he paints and works to make Soheila’s visions come to life.

The first event that took place in the butik was “Guitar Aften” with Christian Brock and Jonathan. 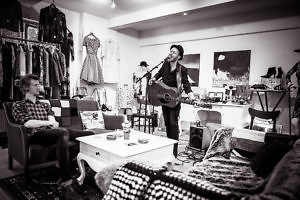 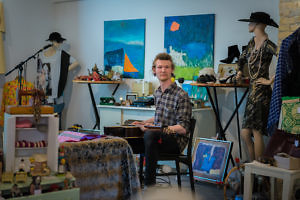 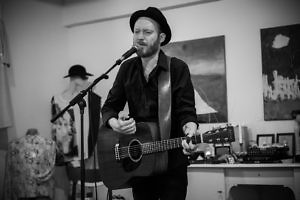 I was lucky: Soheila was my guide and made me ”see things, too”. And I will not be a spoiler, I will not disclosure all the things you can discover here because you might want to see things for yourself, too. Meeting Soheila is an experience in itself: a courageous woman, a dreamer and a fighter who can move mountains. ”I will not give up. I will continue no matter what”. 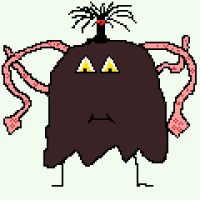